Day 3:
We made breakfast, boiled some hot dogs, packed hot dog buns, made sandwiches, packed snacks, fruits, veggies, drinks, kid's gear, refereed arguments, applauded good behavior, and finally were off to the Magic Kingdom at around 10:30 am. We got to the park, took some pictures at the front, and had some snacks. We also met up with the Lim family and they hung out with us a good part of the day :)

The daddies took the girls on their first ride while the mommies tended to sleeping boys in their strollers.

Gigi came back from the ride face scrunched up saying "Sccaaaarrrryyy!!" Gerald told me that there was a part of the ride that was a bit fast, dark, & loud so Gigi a month shy of turning three, was a bit much for her. We went on the next ride and she was still freaked out. I had to hold her, soothe her, and reassure her that we were no longer going on any "scary" rides.


We separated from the pack for a bit, took Gigi to Small World and there she was finally able to shake off the "scaries." She said, "Only nice and beautiful rides like Small World please!!" 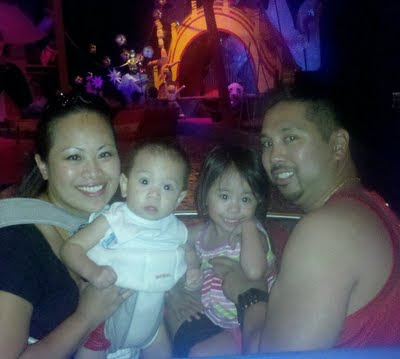 After that Gerald and I took Gigi & Gavin on the train 'round the park.


Then we met up with the brigade at Small World, took some family pics, and rode "the happy ride" a couple more times :)


Our tummies were grumbling and off we went to Goofy's Kitchen for a dinner buffet and to meet up with half of the Arbolario family :) We got there, checked in, and took more family pictures with Goofy =) ;D

I don't know if it was hunger but dinner to me was awesome! Yummmeeeyyy! No pics of food because we were eating, gabbing, feeding, and watching the kiddies. The great thing about Goofey's kitchen are the Disney characters that come to your table, say hello, sign autograph books, and take pictures with you! With tax & gratuity an adult dinner was $45 each and children 3 years and up were $18 each. Definitely worth it if you like to take pictures like we do :)


We hugged, parted ways with the Lims and Arbolarios, and walked off our full bellies where at the hotel we bathed the kiddies, bathed ourselves, and conked out :)

*Phew* Not only is going on vacation fun & exhausting... Blogging about it is too ;D! I promise next part will be the finale.
Posted by MillieRose at 12:42 PM